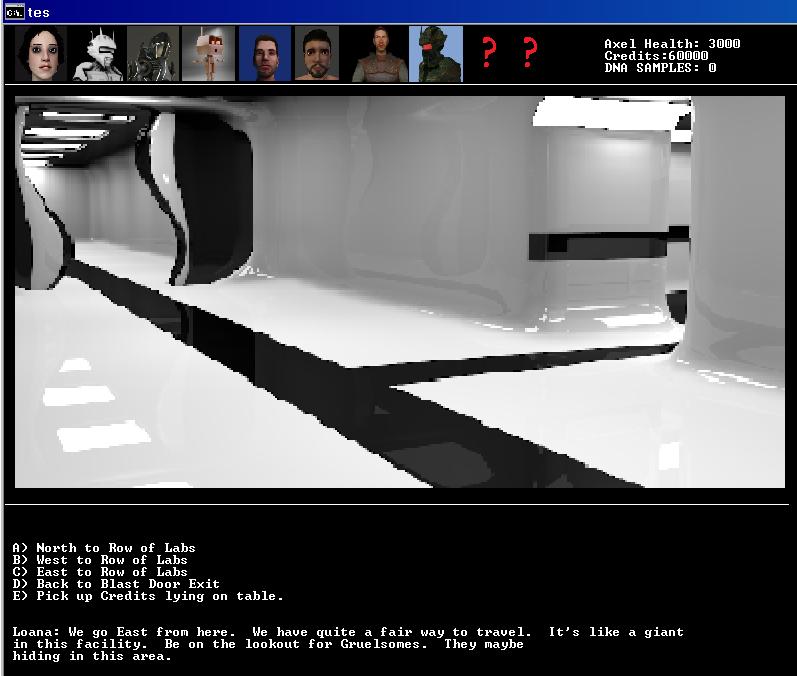 
The Place is a huge massive Honeycomb Complex stretching for a mile or more.
lots of mysterious broken droids found also in this area just outside the labs.
The place has 12 Blast Doors inside the facility.  Storms gun can't penetrate
them so easily.

Meet the GRUESOMES, Warped, twisted diabolical genetic freak monsters
that were the results of a genetic experiment gone horribly wrong or
the warped freak results of a whole bunch of MAKE HUMAN models. HAR HAR.

The Place where Storm also destroys the PLANET if he shoots the labs malfunctioning Shield.

You rescue Skiner's brother Conan and get the formula and find a tech boost. and find
credits. Just the usual  go in find the key, shoot grulesomes up and blow up the facility
but rescue his brother get the formula and come out with a successful theater campaign
storyline.

Hint: You can farm Dna samples also from Grulesomes and sell them on the
underground market (quick dirty way to earn 2 million credits fast) to get
your slip drive key.

a) Blow the whole place up to destroy all the gruelsomes (they were hideious
things anyway) and don't rescue his brother (mission botched), 20,000 credits lost, you get placed on security watch, and one hell of a reprimand from your commanding officer and have to earn back Central's good graces before you command another ship without security guards escorts watching everything.

b) Rescue Skinar's brother, blow up the lab but forget to get the formula, mission
botched, colonists all die, cannot be cured, you get a similar consequence.

c)  Rescue Skinar and get the formula Mission success. You get promoted with
the option to upgrade to a new ship, but it don't mean all your ship problems
are over for that Comptuer A.I from hell finds a way to transfers over to the new ship.

d) The Ultimate EPIC FAIL, screw up with Storm by blowing up the Shield Perimeter
of the labs facility and destroys his gun, unleash the singularity an
watch all the fun as the planet goes into oblivion.  Forunately the commander and his party all escape the growing vortex  in timebefore it swallows the whole planet.  You get big telling off from Central on this
huge botch because Storm never bothered to check his sensors on the shield readings before he shot it..Fortunately if you got the Slip Stream Drive he will be a bit lenient that he can escape to another galaxy before halfthe quadrant in the galaxy turns into another dark matter expanse.  So Central demmands that you look for more slipstream drives so they can install them on their ships to escape.    You will get a chance to be in command without security  supervision again, but not for a while.soon enough Central will have you helping to evacuating other systems that are in danger.
+  You're inside the Shuttle the air turbulance is strong, it is rocking everybody around in the shuttle.