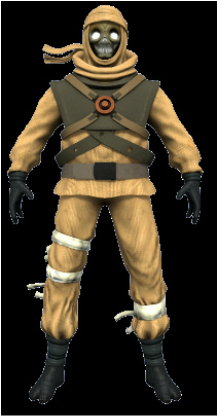 
"Where Did you get that cool light?""


If you don't trade junk deals with them these desert demons get easily offended...  Their planet is mostly a desert wilderness but they do have some plant facilities for mining, minerals, oil. HINT: All Ionians all look alike, its hard to tell the difference except when you see their strange glowing eyes then you know its an Ionian.


Snif. Sniff.. and Snuff 'No its not a cold' its Cargo trades of Alien medicine.

Moral: Their BARK is worst than their bite.
They dwell in a Hot Inhospitable Climates, so you need Cold Suits for your party to visit their barren homeworld planet.

Commander: This price is outrageous $1,000 credits just to dock my ship on your world?

Docking Control: If you want to have fun on Ionia, you have to pay the price.

Commander: What Fun?, your world is all full of hot sweltering heat !!

Docking Control: Fun for us, I mean.  Its nice and cool to us, but unbearable to you guys, so its no bother to us at all.  That will be 1,000 credits please.

Commander: I'm not paying that.

Docking Control: Well you know what to do then.

A) Pay the ridiculous Fee and be done with it.
B) Leave the planet.

But If you're lucky The Docking Droids are away on National Cyberday on Ionia to listen to the latest sales nonsense coming from the Corporate Bull Droids. .

So its Free to dock at this planet.  (Note: Ionia stole the National Cyberdays from Hercai)

If you're not lucky and you dock there when its not National Cyberday, then you get charged 1,000 credits docking fee, the reason why the fee is so expensive is because the droids want to cover their own personal expensive s from time to time like Oil Changes, Software Upgrades, ect, and if you want to complain, you find out the Magistrate in charge of disputes on the homeworld happens to be a Corporate Bull Class Droid affectionately known as Judge Slowtrac. A droid that is full of nonsense in a special class of its own so you have no chance of winning the trial with this judge because nobody has won any trial against that droid in over 100 years.

T6 releases more star charts and finding about the Anti-Anomaly Shielding allowing you to take your ship into systems with anomalies, only avaliable if you have the slipstream drive and can go to T6's homeworld to get the necessary upgrade or you are not gonna beable to explore inside those anomalies.

Ionia Cargo area: Lots More dead corpses are found which spooks Loana all out and lots of loot and more credits.

Dodgy, Shifty, Creepy world, beware of bad traders and other rip=off merchants and criminals on this planet.